Is nurture or nature the cause of under-representation of women in Science, Technology, Engineering and Mathematics (STEM)?

A view from academia…

The House of Commons Science and Technology Committee published their report on ‘Women in scientific careers’ on Thursday the 6th of February after consulting 90 written submissions, including one from Cambridge AWiSE, and 13 witnesses including academic researchers, diversity and equality groups, universities, research and funding councils and the Government. Reading this report as an early career biomedical scientist, was oddly shocking and encouraging at the same time. The Committee points out problems many young scientists will recognise, but adds that these problems have long been identified and despite serious efforts have not ceased to exist.

The Committee explains that the UK economy needs more skilled scientists and engineers. To meet this need more women will need to be retained in STEM careers. The Government currently focuses on inspiring young girls to choose a STEM career. 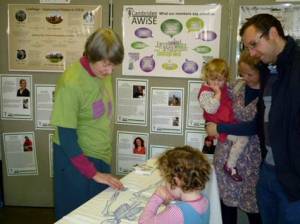 The Government aims to increase the number of women in STEM by inspiring young girls to choose a STEM career, like Penny does here at the Cambridge AWiSE stand at the 2013 Cambridge Science Festival.

However, although this may increase the input, this does not stop women from gradually disappearing higher up the career ladder, the so-called ‘leaky pipeline’. Thus, nurturing girls into actively pursuing a career in STEM for some reason does not lead to a larger representation of women at the top. Can this have something to do with the female nature? To my pleasant surprise the Committee actually touches upon this in their report.

The harsh academic environment, recently described to me as the ‘Darwinian process that selects the best scientists’, may simply be more suited to testosterone-driven alpha males than to women. And therefore, no matter how much you nurture girls and women into pursuing a career in STEM their nature will steer them away from the academic environment later on in life. The Committee for example quotes Oxford Research and Policy and Katalytik who state that “many institutions have found that implementing good working practices benefits all staff […] whereas bad working practices tend to adversely affect women more than men”. Dr Bryn Jones, Visiting Fellow at the School of Physics, University of Bristol, adds that “it is dangerous to generalise about personality types and gender”, but “an aggressive pushiness may be more common among men than women, which may help some types of men to get essential career support from established academics”. And finally, the University of Oxford summarizes it as follows: “within many science disciplines, work is organised into large research groups, which are often described as having a ‘sink or swim’ culture, with few formal reporting or support mechanisms”. It is added that “the evidence is that the absence of such mechanisms is largely neutral for men, but has a significant negative effect for women, who place a higher value on structured support”.

Many additional reasons why women may leave the academic career path are mentioned, including short-term contracts and the requirement to move institution at a time that many are trying to settle down with a family. Also, a lack of (knowledge about) maternity provisions and the difficulty of working flexibly or part-time in the extremely competitive academic environment are mentioned.

The notion that funding should be awarded based on scientific excellence is supported by the Committee. However, the report mentions that there is the view that the definition of excellence used may be too narrow. The measures used to put a number on a person’s scientific output are not always appropriate. For example, women are more likely to contribute to non-research activities which are often not taken into account. Although addressed in the newly devised Reference of Excellence Framework, measures for publication output and citation like the h-index, do not take into account time away from research and part-time work. Perhaps the emphasis should be more on quality than on quantity. In this respect, the quote from The Royal Society of Chemistry that “generally, women write more comprehensive and concise journal papers than men, resulting in fewer publications but ones that are more widely cited” is interesting.

Although the shared parental leave system proposed by the Children and Families Bill and supported by the Committee may create the flexibility welcomed by some, I am afraid it may not help women in general. Even a healthy pregnancy may affect productivity, if not because of the hormones, then simply because of the fact that you are carrying a bag of potatoes around. Also, what about breastfeeding? The NHS Choices website states “Breastfeeding is the healthiest way to feed your baby. Exclusive breastfeeding is recommended for around the first six months of your baby’s life”. Unless childcare is (made) available on site, a woman cannot return to work and stick to exclusive breastfeeding as recommended by the NHS. Of course there is the option of expressing milk, but the available facilities are too often far from ideal and it takes far more time than simply feeding your baby. Finally, the BBC reported on a study showing that female graduates earn thousands of pounds less than their male counterparts last March. The gap is even called the ‘motherhood penalty’. Add the cost of childcare to the equation and the sum shows you that on a basic post-doctoral salary it barely pays to work when you have two or more young children. Also, as the Committee states, women tend to be the primary carers, which means they are more likely than men to end their STEM career at this stage. A general conclusion could be that in the current system the female nature steers women away from a career in STEM. Perhaps the situation can be improved by practically supporting women in their family planning, providing technical support during pregnancy and after, creating more affordable on-site childcare and making it more attractive for partners to truly share the care.

Initiatives, like the Athena SWAN Charter and the Daphne Jackson Trust are steps in the right direction. I myself have benefited from the University of Cambridge Returning Carers Scheme and it does help. It will be interesting to see whether these schemes ultimately help women in obtaining permanent senior positions. Do Daphne Jackson Trust fellows with the ambition of becoming a principal investigator have the same opportunities when it comes to climbing the academic ladder as people that have not had a career break?

It cannot be ignored that the current view of many women leaving a STEM career may be slightly biased. It was problematic for the Committee to find data on the destinations of women who leave STEM careers. Since there were only records of how many women were still working in academia and not of where the others have gone, it cannot be excluded that many have changed career and are not genuinely lost to STEM. Also it is likely that many women are not ‘wasting their knowledge’, but actually applying it in a different role and are therefore still making a useful contribution to the economy even if it is outside STEM.

At the age of 33, and as a mother of two girls, I find myself at a crucial stage of my career. I have a good publication record and have attracted several grants. My current research is funded through personal awards and I have the support from my department to try and secure a 4- to 5-year intermediate/career development fellowship in the next 2 years. If successful, I would be allowed to start my own independent research group. I love research and am keen to make this work, however, I have found myself lying awake at night worrying about the fact that I work part time and the pressure to publish. In the end it will be up to the mercy of the reviewers and the committee that judge my application whether they feel I have done enough. Finally, if successful in obtaining one of these fellowships, I would still not have any job security. Even though I would become a principal investigator, this position will not come with a long-term or permanent contract, which means that after these 4 to 5 years I would still be without a job unless I secure a senior fellowship. In other words, although I am clinging on, there are quite a few big holes in the pipeline for me to leak through.

As well as the nurturing approach taken by the Government, perhaps an initiative aimed at making the STEM career path more versatile and the work environment more conducive for the female nature will help in retaining more women in STEM careers.

From: CamAWISE news
← “And what do you do?”
“You don’t need to be artistic to be creative…” →
No comments yet