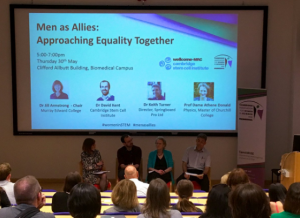 Attending an event addressing “gender equality” or lack thereof seems to be a given these days, but attending one where men are described as “allies” refreshingly bridges the gap between two sides who are too often being described “in conflict”. A discussion by a very balanced panel (men/women, experienced grey hair/young and on a learning curve, established/still breaking through) made time fly past quicker than one would expect. But that would be down to the passion, which was equally shared between all panellists and the fact that the engaged audience counted men and women and included people with even more grey hair than I have!

One of the issue that was brought up is that the challenges of this issue is created by how careers have changed, where in academia and STEMM careers we now reach stability well after our life responsibilities have become serious: mortgages, relationships, children. Trying to manage the career breakthrough when these responsibilities become all-important has added pressure, which unfortunately, still weighs on women more than men.

It would be easy to say that “things are changing”, but that is a cop out statement: bullying of women (and men) who may approach their life choices, priorities or career and staff management in a novel or simply different way is still pervasive and effected by the new generation as much as the old. What has changed is the number of people who don’t accept the status quo. But institutions can also play a role: promote people who are good leaders as well as decent scientists! The promotion application does not contain any item about how we manage a meeting…yet as a senior staff member, isn’t that what we spend 75% of our time doing? I heard the following remark: “We should fix the system, not women”. And can we replace ‘the system’ in that sentence by ‘the university code of conduct’?

The thing that struck me last night was a statement by one of the panellists: “It is easier for men to do something than finding out what to do”. Even for the most motivated of men, changing the culture, even in the microcosm of one’s own little work group, triggers often a “saviour” behaviour where we think we know best what to do. I raised that question last night and one of the panellist’s answered: “ask the question rather than come up with the answer, get people to spell out their own strengths, appetites and drivers”. It may seem obvious…but it is not always the natural reflex.

Institutions set out big policies, but often just basic decent human behaviour is a much more straightforward way to deal with issues on a daily basis. It is about simply being interested and involved in how other people tick. There was a lot of talk about shared parental leave. It is clear that, from a personal point of view, being more involved with the running of the house and looking after my girls, has made me understand the challenges of running both a career and personal time. It has also given the opportunity to my wife to have time for her own career. As well as head space and energy! But shared parental leave is still less than accepted these days (apparently only 5% take up). Financial incentives as well as practical incentives are absent whilst they are in place in other countries. It may sound counter intuitive these days, but let’s look beyond the borders and see what works somewhere else!

And a last point for whoever thought the above is just “sissy stuff” or that last night’s discussion was not worth attending: diversity is strength, the most resilient systems are those that have enough inner diversity to adapt and grow through any challenge and have long-term sustainability. If you don’t promote and champion differences at some point, you and your work will be a dying breed.

From: CamAWISE news
← BLOG – How Springboard has increased applications from female engineers and scientists (Part 3 of 3)
Chocolate Lock-In at Hotel Chocolat – 8th and 18th of July →
No comments yet