Blog – Energy for the Future 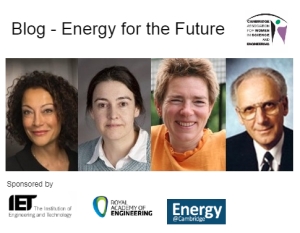 Cambridge’s Trinity Hall played host on Thursday May 21st 2015 to a wonderful and lively evening panel discussion looking at how we will keep up with the ever-growing energy demand.

The event chaired by Raheela Rehman kicked off with an introduction to CamAWiSE by Claire Lucas, the CamAWiSE Co-Chair. The evening discussion was started by Iman Hill, former Vice President of Development and Production, Africa at Sasol Petroleum International. She introduced the audience to the historic and predicted future energy use: demand for energy will surpass the supply by 2050. This global demand will come mostly from developing countries such as; China, India and Saudi Arabia. Although not part of the Organization of Economic Cooperation and Development (OECD) members their consumption of oil continues to increase in parallel to their energy intensive manufacturing sectors.

Hill pointed out some of the innovative ways in which the oil and gas industry are attempting to keep up with this energy demand; from subsurface imaging to deep water drilling. Iman also spoke of being a female in the energy sector and how changes have occurred since she first entered the field. Within a job remit, her take home message was to consistently; work well and to reliably deliver – there is nothing to prevent women from being comfortable and confident to work in the oil and gas sector.

An alternative perspective was given by Professor Jenny Nelson, from Imperial College London, who discussed the use of an energy mix using renewable sources to meet the 2050 energy target, thereby decarbonising the power sector. Solar energy, she explained, is the fastest growing technology in the low carbon pathway and is forecast to be the largest source of electricity by 2050. Although solar energy is abundant, easily distributed and proven to be efficiently used for a diverse range of technologies, there are several caveats which must be overcome. These include; fluctuations in incident sunlight and therefore a requirement for energy storage, high cost and regulation. She, however, remains highly optimistic that none of these issues are insurmountable. These challenges can be addressed by the enthusiasm, ability and current research undertaken by researchers and future students. Professor Nelson highlighted that female researchers entering this field of research are well represented, though retention remains an issue.

Professor Clare Grey from the University of Cambridge was next in the lineup of our distinguished group of speakers, posed a thought-provoking question to the audience: how do we maintain a vibrant economy in the UK and the EU as a whole, while allowing growth in the developing world? Although during recessions, there is a silver-lining; the unexpected up-side is a reduction in carbon dioxide emissions, energy from renewable sources must be economically viable. Fluctuations in energy requirements can be in the range from hours to minutes ( e.g the UK plug in for their evening tea known as the “6pm kettle-spike”), therefore energy storage mechanisms are an essential aspect of meeting the future demand. From flywheel systems to aquifier thermal energy storage, Professor Grey maintained that we need to keep our options open and develop an array of methods for energy generation and storage.

Lastly, Professor Sir Brian Heap inspired the audience by introducing us to his work with the Smart Villages Initiative. This platform investigates the universal access to modern energy services, specifically within rural villages. More than 1 billion people are without access to electricity and energy and this can, he explained, act as a catalyst for development. With respect to renewable energy sources, his goal is to shift the balance of opportunities between cities and villages. He instilled in us that, when thinking about energy development, we must not forget about how this can translate to remote off-grid villages. A challenge for future research is to study more cost-effective ways to promote local solutions, such as home- or institution-based energy systems, thus allowing villages to plug-in, rather than being reliant on a national grid. Professor Sir Heap brought to our attention the large number of female researchers involved within the Smart Villages Initiative and their contribution to the research is helping the Initiative to progress. 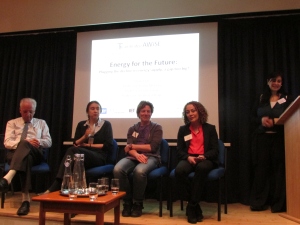 With the talks at a close, the floor was opened up to the audience where they asked their own burning questions about how to solve the potential energy crisis, to name but a few; how efficient is renewable energy and what is the role of governments in bridging the energy gap? Networking continued well after the close of the session and everyone left with their own renewed sense of energy for future research and development. The speakers, audience and sponsors were thanked by Penny Coggill, previous CamAWiSE Chair. In addition, as part of CamaWiSE, I was also left inspired by the strong female role models that we had the pleasure of meeting and who have become leaders in solving this global issue.

Thank you to the speakers and to the Sponsors.